Seattle Parks and Recreation has just released revised plans for a pilot project that will guide future policy regarding “new uses” in park greenspaces. This pilot will install a mountain bike park in Cheasty Greenspace on Beacon Hill, but the resulting policy will affect all our park natural areas, and could open the door for allowing any number of new uses in all of them.

This is a bad idea, so please send in your comment to the Parks Department today.

We think park forests should be shared by all people, not all user-groups.  They should not be carved up like a pie and offered, piece by piece, to specialized-user groups. They should be preserved for passive-use, accessible to everyone and to wildlife, too. With Seattle’s growth, that is going to be more important than ever.

Tell Parks that the pilot project at Cheasty Greenspace is not equitable, sustainable, or wise, and should not proceed. Tell them to keep Cheasty and all greenspaces passive-use only.

In 2015, Parks promoted Cheasty Bike Park claiming it would make the forest accessible, safe, and welcoming for all people. Now, with only a two-week public comment period, they’ve quietly released a radically different approach. Their newest version welcomes only bikers at the expense of everyone else.

The latest design has eliminated accessible walking trails (those suitable for less-abled people) and has eliminated the pedestrian-only trails. Their newest design makes pedestrians walk on twisting 4-foot gravel paths shared by bikes. This is unsafe and will make the park virtually inaccessible to older people, young children, less-abled people, or anyone who just wants to experience nature without having to be constantly vigilant for speeding bikes.

Parks claims that 4-foot shared trails are appropriate because they are used in “some parks” in several places like Tacoma or the Eastside. That’s ridiculous. The few parks they cite are roughly ten times bigger than Cheasty and have little in common with Seattle parks.

The maps below illustrate the broken promise to make this park pedestrian-friendly. 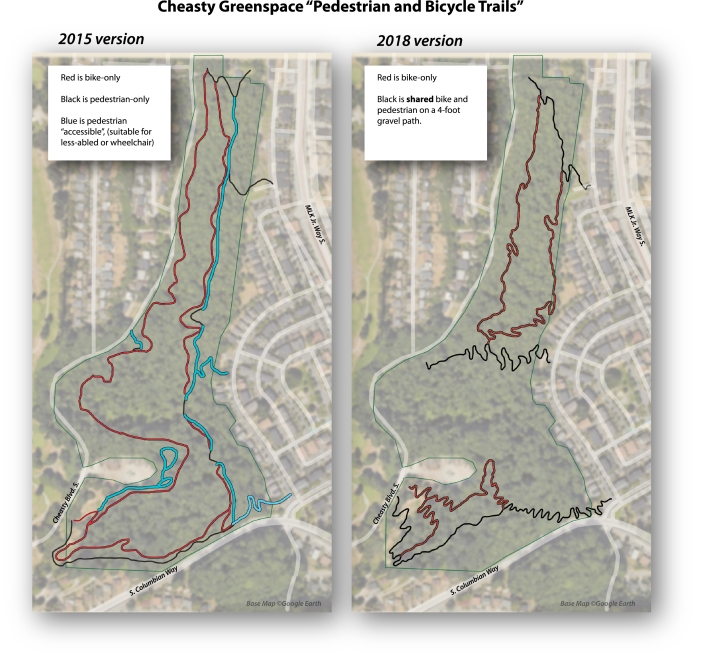 Seattle needs a policy to preserve greenspaces for passive-use only. Too many uses in a forest ruins the nature experience for people and the habitat for wildlife. If one specialized-user group is allowed to have part of a natural area for their own use, other groups will want access too. There is already significant pressure by off-leash dog groups, private zipline companies, and others.

Cheasty Bike Park has been extremely divisive for the community. At first it was supported by some neighborhood groups who were swayed by Parks’ promise it would make the forest safe and welcoming for all people, but when more people found out about the plan, it was vigorously opposed city-wide. People were alarmed that Parks had neglected to do the proper environmental impact studies, so some of them organized, hired lawyers and wetland and wildlife experts (at their own expense) and appealed to the city’s Hearing Examiner. And they won their case.  (The statement from Friends of Cheasty is here.)

But in spite of all that, the project continues. When Parks was not allowed to route their bike trails through wetlands, they simply got rid of the accessible pedestrian trails and rerouted the bike trails. Now the park will be virtually unusable for most people.

The obvious conclusion here is what we’ve been claiming all along. Seattle’s few remaining park forests are too small to be carved up for specialized-uses. Mountain biking requires space, and Seattle simply does not have it. The same goes for off-leash dogs in Seattle forests, ziplines in Seattle forests…and all the rest.

From our post The Skunk on Table, published three and a half years ago, here are letters from city-wide organizations speaking about the importance of keeping our park natural areas available to all:

7 thoughts on “Park Natural Areas Must be Preserved!”