Last weekend, Seattle Parks hosted a “Mini-Summit” for Natural Areas. There were over 20 groups and about 100 people from around town who are concerned with Natural Areas in Seattle Parks. There was an exhibit hall where the different groups had table displays, and a moderated panel discussion about Parks’ policies on Natural Areas.

The Seattle Nature Alliance had a table display and we sat through the panel discussion.

So…what is at stake here? Why are so many nature groups around town so upset? And, why is Parks holding these highly-structured meetings, where there is limited opportunity to voice opinion? Does Parks have a pre-determined agenda to open Natural Areas to other uses including commercial ziplines, mountain bike skills parks, and who-knows-what-else?

We fear they do.

Acting Superintendent Christopher Williams started the meeting by putting the “skunk on the table” in his words. And by skunk, he said he meant the Cheasty Bike Park — a mountain-bike skills installation in one of Seattle’s last undeveloped natural areas. To be fair, I don’t think he actually meant to say this bike park idea stinks.

But in many ways, it does.

In our recent post, Passive Use, a Thin Green Line,  you read our views about this issue.

In anticipation the Seattle Board of Parks Commissioners meeting on April 9, 2015 about the Cheasty Bike Pilot, the following organizations addressed eloquent letters to the Commissioners about the Supplemental Use discussion and Cheasty. They appear here with permission. Please take a moment to read them, and feel free to share: 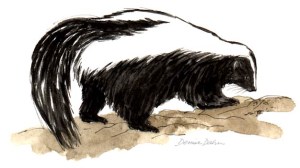 5 thoughts on “The Skunk on the Table”